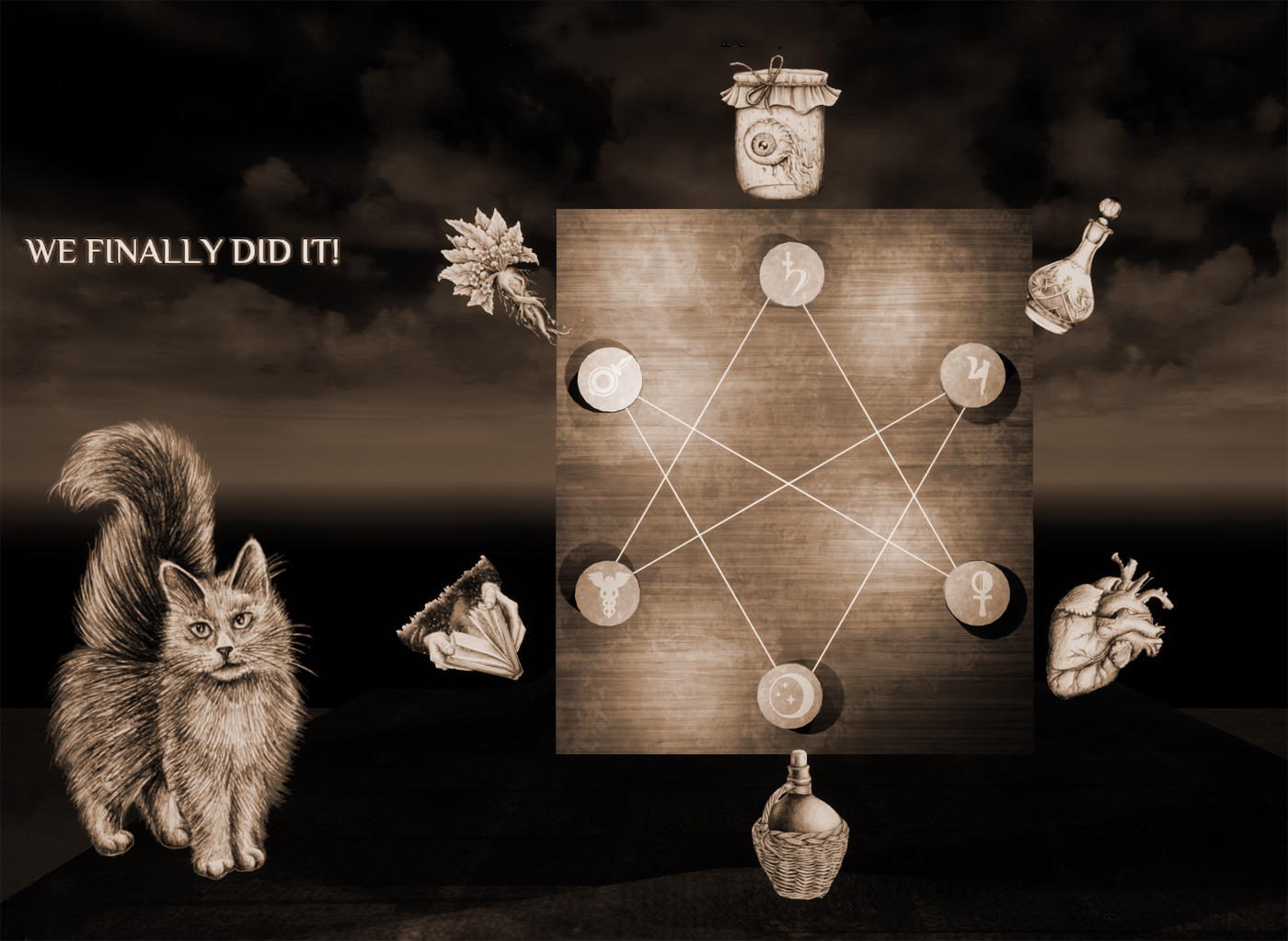 The Second Week of October

The Book of Lies, which is also falsely called Breaks,
The wanderings or falsifications of the one thought of Frater Perdurabo
(Aleister Crowley)

October Night Games are about magic. Magic is the basis of the setting, magic should be the basis of gameplay. No matter how different the characters may be (witches, vampires, monks, crazy scholars or adepts of unnamed cults), no matter which different abilities they have, no matter how different are paths they go and why, all of them had to prepare and perform a magical ritual. Therefore, inventing a magic system was a very serious task.

The first thought was to borrow rituals from different variations of the Necronomicon. We were inspired by Zelazny’s A Night in the Lonesome October, but the author himself was inspired by H.P. Lovecraft and his followers (especially Robert Bloch). Many authors have tried to recreate the writings of Mad Arab: especially worth mentioning are such works as Al Azif and The Simon Necronomicon. Another important book containing Lovecraftian rituals was De Vermis Mysteriis, a book published by Robert Bloch. This manuscript revealed the terrible secrets of the Ancients centuries before the Necronomicon was written.

Alas! It was impossible to re-create Lovecraftian ritual magic in the game. Not only because of the excessive cruelty of Necronomicon’s rituals described there (we have nothing against human sacrifices per se, but good old Alhazred went sometimes too far). The point is excessive accuracy and attention to the smallest details. Rituals require a certain position of stars and planets, they require the use of strictly defined items, they often are geographically bound. Another important aspect of most Necronomicon rituals is the proper recitation of spells and prayers. Proper gestures are also important.

All this could be realized like some kind of mini-game. Imagine a Cultist Hero game where you would need to press keys corresponding to the syllables of spells being recited. It would look great in some other kind of project, but it would be unusable for us, as mini-games would completely kill the “digital tabletop” spirit. And if we simply reduced all these painstaking and complex actions, almost nothing would be left. As a result, the player simply would not have felt any involvement in what was happening.

Another limitation of Lovecraftian ritual magic is that it would force players to follow a single path. October Night Games, on the contrary, should stimulate creativity, make players improvise: choose the ingredients for the rituals on their own, achieve unexpected and even unpredictable results in each game session.

From “fictional” occult schools, we moved on to “real” ones. The bridge between them was the chapter The Metaphysics of Lovecraft from The Satanic Rituals by Anton Sandor LaVey. This opus did not help us much, however, I advise those who are planning to make some Lovecraftian LARP to study LaVey’s rituals. The grandfather of modern Satanism knew a lot about role-playing games. Then we turned to Aleister Crowley, who explained in a popular way the legacy of many medieval hermeticists.

Ultimately, everything was brought together via Chaos Magic, special thanks to Peter Carroll and his Liber Null. Chaos Magic is a modern syncretic occult school that allows the mage to choose their own symbolic language, invent new rituals and spells, or give a different meaning to existing ones. That’s exactly what we needed to do.

A hexagram is the heart of our magic and combat system. There are planet symbols around it, each symbol is related to certain magical or if you like, psychological phenomenon.

Each ingredient that can be found in the game contains two primary elements. By placing an ingredient in a corresponding slot, we draw a line connecting these elements on the hexagram.

Each Lesser Ritual (all the rituals are performed before the Halloween night are called Lesser Rituals) is set by a magical figure, which has to be drawn by placing the ingredients, containing the elements in particular order. The ingredients, which were used in the Lesser Ritual do not disappear – they will be used at the end of the game, in the Great Ritual, which involves all Hexagrams of all Players simultaneously.

To draw a Unicursal hexagram (used by Crowley) we would need a human eye, a crystal bottle containing the moonlight, the heart of a dead man, a bottle of wine, library dust and mandrake root.

Of course, there will be sacrifices in October Night Games. The player has the opportunity to subdue the NPC, both humans and non-humans, by breaking their will and their mind. You can use the obedient puppets as servants or sprinkle their blood on the altar. Such an offering can replace several ingredients and allows you to complete the Lesser Rituals faster.

The players who prefer to avoid killing (you can win the game without making your hands bloody) can go the other way, creating missing ingredients for the ritual in the alchemy laboratory. What happens if you put together in a crucible a skull found in a cemetery, a fly agaric hat and add some wine to it? We will not reveal all the secrets ahead of time.

As it was already mentioned, magic is closely connected with the combat system of the game. Dice, each face of which corresponds to one of the primary elements, are used to predict the future and to manipulate reality. The battle takes place mostly behind the scenes, but what exactly happens will depend on how you deal with the rolled dice. Different combinations of elements correspond to different actions. You can inflict physical wounds on enemies, try to drive them crazy, or you go into a dead defense or even try to run away. The combat system is being modified and improved, the final version will be different from what you see in this video.

In the next text, we will talk about social mechanics, which will be an important part of the gameplay. Deduction, betrayal, and intrigue performed by live players and artificial intelligence.